Based on our philosophy “Traditional materials are the newest”, NMRL undertakes the challenge of reinterpreting and reimagining the use of materials and construction methods from ancient and medieval times and applying them in the modern setting. They do not select building materials from catalogues, but collect materials ranging from antiques to industrial materials from a unique perspective on a daily basis and incorporate them in their spatial design. The design is further enhanced by modern details achieved through the combination of traditional artisans’ skills that bring out the best qualities of materials and the latest technology. The exhibition reveals trajectories of NMRL’s ongoing activities exploring architectural possibilities of traditional materials. 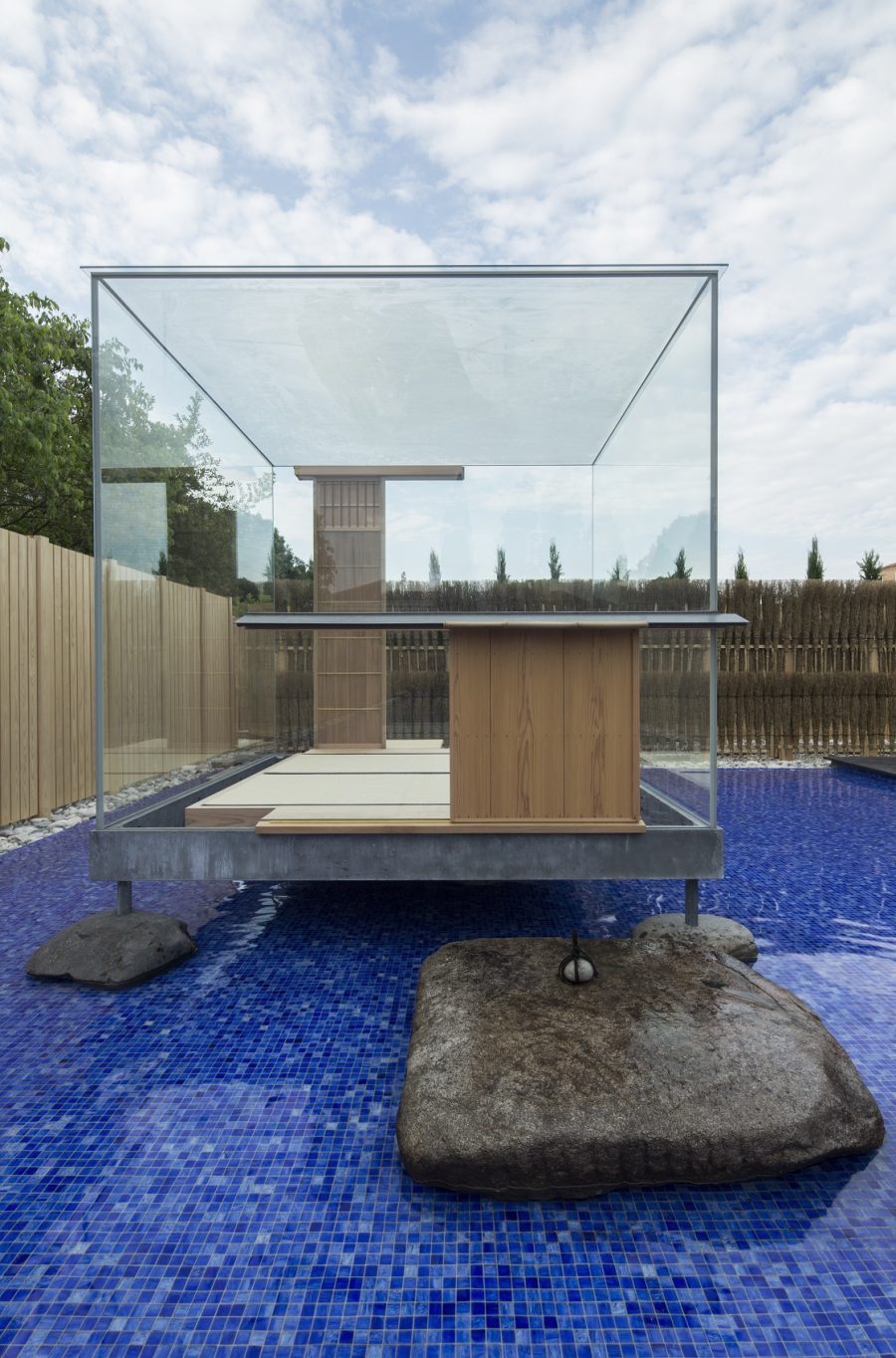 Title: NEW MATERIAL RESEARCH LABORATORY・ -New Material x Old Material-
*The symbol ”・” is pronounced as “ten” in Japanese and a word meaning “exhibition” is also pronounced as “ten” in Japanese.
*The exhibition “ten” and the “ten” of the 10th anniversary of the laboratory are embodied in the ”・” (ten) symbol.
Dates: October 21st (Sun.), 2018 – January 14th (Mon.), 2019
Venue: ARCHI-DEPOT Museum – Room A (2-6-10 Higashi-Shinagawa, Shinagawa-ku, Tokyo 140-0002)
Open Hours: Tuesday – Sunday, 11:00 AM – 7:00 PM (Admission until 6:00 PM), Closed on Monday (open when Monday is a holiday, but closed the following Tuesday)
Admission: Adults 3,000 yen / Students 2,000 yen / 18 and under 1,000 yen (Including the admission for the exhibition Room B and a free copy of NMRL’s portfolio booklet)
* Free admission for visitors with a physical disability certificate and one of their carers
* Presentation of your school identification card Windicating your age or a physical disability certificate will be required on admission.
Organizer: ARCHI-DEPOT Museum
Curated by: New Material Research Laboratory Exhibition
Design by: New Material Research Laboratory
Curatorial Advisory by: Fumiko Suzuki Curatorial Support: Art & Public Co., Ltd.
Sponsor: ISHIMARU CO.,LTD., KAJIMA CORPORATION, and HIGURE17-15cas
Cooperation: Odawara Art Foundation (Public Interest Incorporated Foundation) and Gallery Koyanagi

・Exhibition space design features shikigawara (Japanese floor tiles), one of signature design elements of NMRL.
・Life-size experiences of NMRL’s approaches to materials are offered throughout the exhibition space composed of characteristic old and reclaimed materials actually used in NMRL’s projects
・Eight major projects by NMRL are presented mainly through Hiroshi Sugimoto’s photographs of the completed buildings and architectural models.
・A prototype of “Go-Oh Shrine/Appropriate Proportions” in Naoshima, Kagawa (Hiroshi Sugimoto’s first architectural work prior to establishment of NMRL), elaborately constructed using the same materials, is exhibited.
・An architectural model of ” Odawara Art Foundation : Enoura Observatory” (Odawara, Kanagawa Prefecture) that opened in 2017 (twenty years after Hiroshi Sugimoto had started the conceptual design) is presented along with Seascapes, one of Sugimoto’s masterpieces. 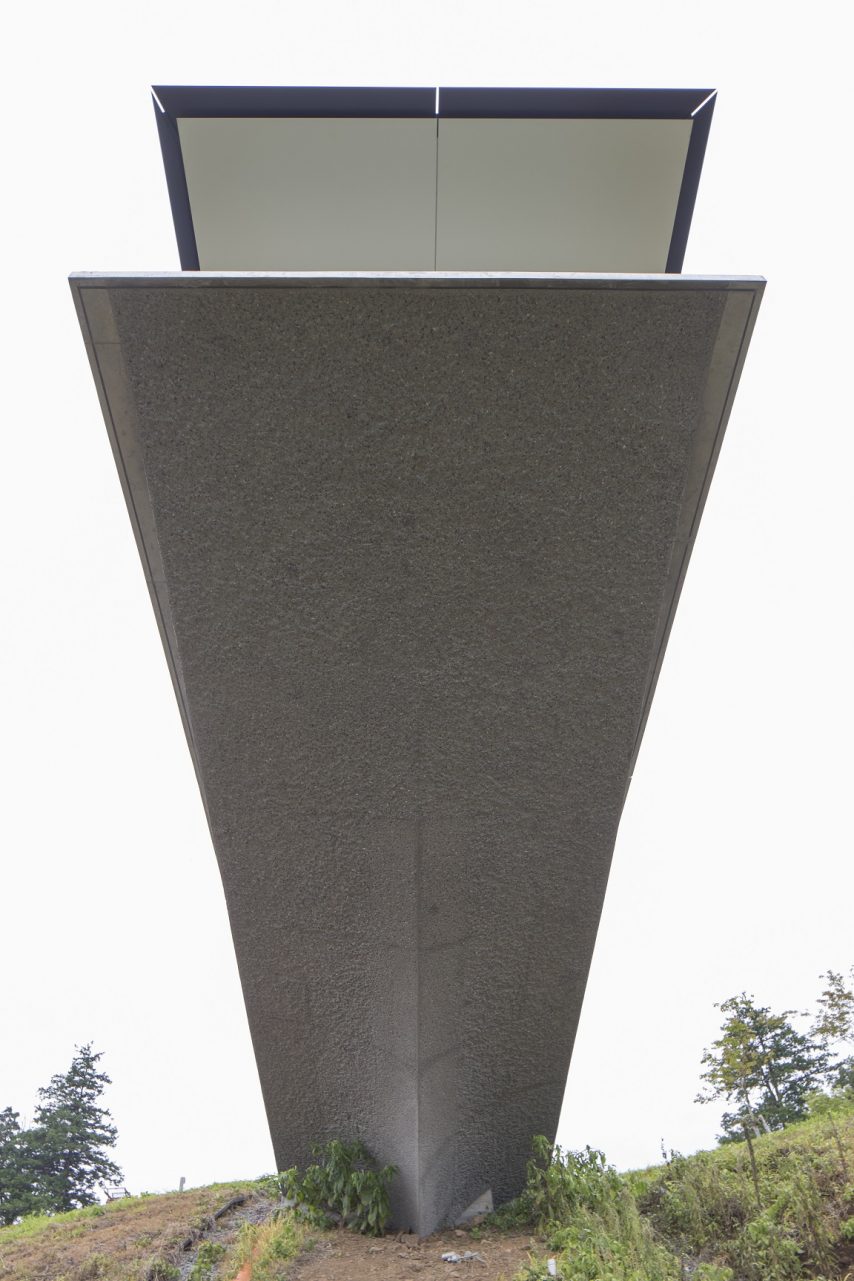 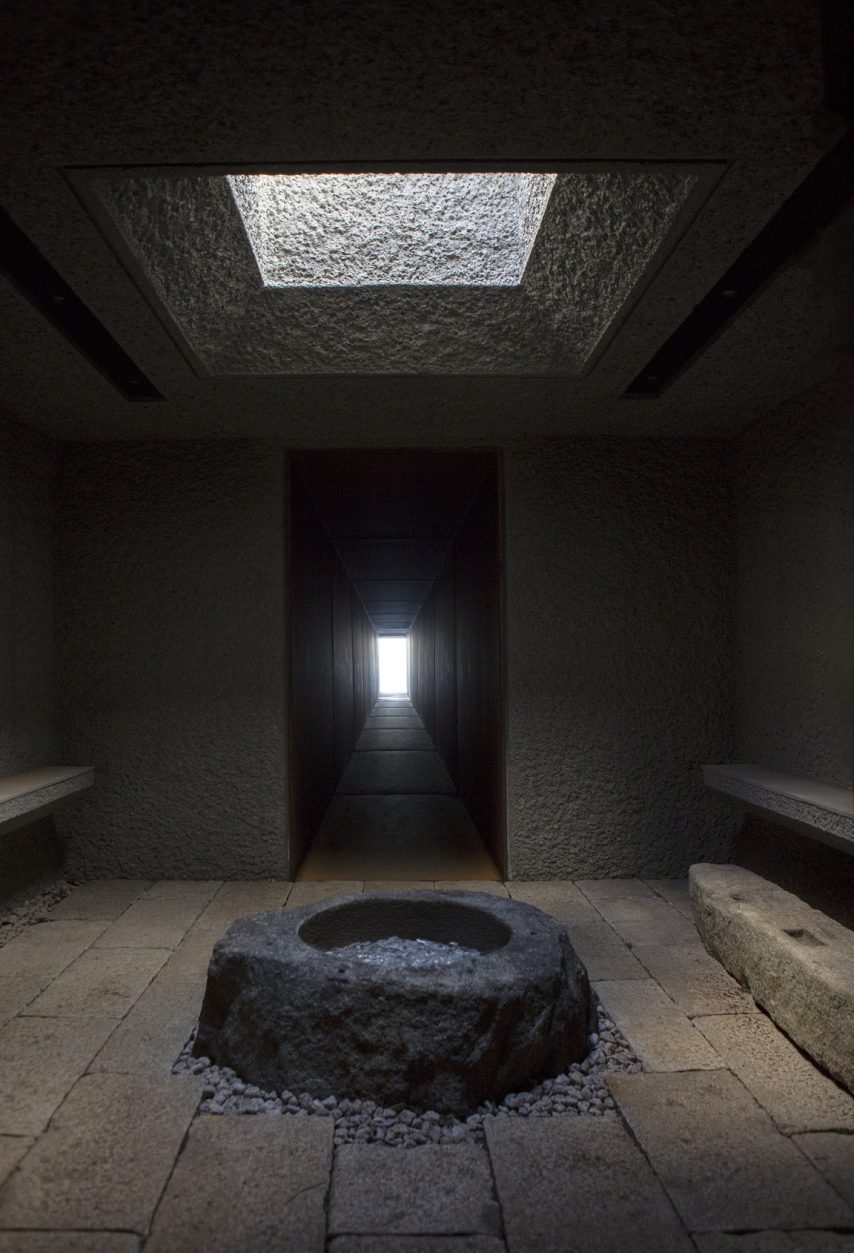 I started my career in contemporary art as a photographer. It was some time later that I began photographing buildings. A request from The Museum of Contemporary Art, Los Angeles was the trigger. The museum asked me to create photographic works based on important buildings for an overview of twentieth-century architecture. Then, from a certain point, I took over the job of constructing spaces for exhibitions of my own work within so-called art galleries. I had suffered through some difficult experiences, particularly with newly built gallery spaces. At Hiroshi Sugimoto: History of History, an exhibition to mark the opening of the Daniel Libeskind-designed extension of the Royal Ontario Museum, I was quite bewildered to find the space still under construction on the first day of the exhibition. My struggles were repeated in many spaces where the theories of the architect were in conflict with the practical needs of the artist—Gehry’s Guggenheim Museum in Bilbao, Nouvel’s Fondation Cartier, Herzog & de Meuron’s de Young Museum, Zumthor’s Kunsthaus Bregenz, Koolhaas’s Leeum and Mies van der Rohe’s Neue Nationalgalerie. These ordeals, however, enabled me to refine my own sense of space. They provided me with helpful examples of what not to do, fed through to my sensibility, and over time caused an image of the kind of building I wanted to actualize inside my mind.

As I got older, I had the idea of pulling together all the work that I have done in my life into a coherent whole, and began working on the concept of the Odawara Art Foundation : Enoura Observatory. It was precisely then that an unexpected architectural commission fell into my lap: a request from Soichiro Fukutake to reconstruct the Go’o Shrine on Naoshima. This project gave me the opportunity to think about the outward forms of Japan’s ancient religious beliefs. A commission to design the Izu Photo Museum in Mishima soon followed. That was what inspired me to join forces with Tomoyuki Sakakida and establish an architectural practice. I set up the New Material Laboratory to rescue and revive the increasingly overlooked old materials of traditional Japanese architecture. My aim was to prove that the old materials are in fact the newest materials of all. Here time runs backwards. The Enoura Observatory is designed to draw the heart and mind all the way back to the very dawn of human consciousness.

Born in Tokyo in 1948. After graduating from Saint Paul’s University, he moved to the United States in 1970 and started his career with photography in New York in 1974. Sugimoto has received international reputation as a photographic artist through his solid technique and clear concept, and his works are collected by major art museums throughout the world. In recent years he has been expanding his field of activity to literary and architectural work. In 2008, he founded New Material Research Laboratory with an architect Tomoyuki Sakakida. Awards and honors, including the Mainichi Art Prize in 1988, the Hasselblad Foundation International Award in Photography in 2001, the 21st Praemium Imperiale in 2009, Officier de L’ordre des Arts et des Lettres in 2013 and Isamu Noguchi Award in 2014

Born in Shiga in 1976. He studied architecture at Kyoto Institute of Technology and worked for Nihon Sekkei Inc. after completion of Doctoral Program in 2001. In 2003, Sakakida established his own practice Tomoyuki Sakakida Architect and Associates co., ltd. In parallel with running the practice, Sakakida worked for Waro Kishi + K. Associates / EX from 2003 to 2006. In 2008 Sakakida founded New Material Research Laboratory with an artist Hiroshi Sugimoto, and since 2013 Sakakida is the director. He is involved in a number of architectural design as a partner architect of Sugimoto. Sakakida is currently teaching at Kyoto University of Art and Design.

New Material Research Laboratory (NMRL) is an architectural firm co-founded by artist Hiroshi Sugimoto and architect Tomoyuki Sakakida in 2008. In spite of its name, New Material Research Laboratory examines materials from ancient and medieval times and focuses their activities on reinterpreting and reimagining the use of these materials in the present. Standing against today’s standardized and superficial construction materials, NMRL daringly explores architectural possibilities of traditional materials that are difficult to handle, in addition to preserving and improving elaborate skills, spirits and knowledge of expert artisans. Hiroshi Sugimoto and Tomoyuki Sakakida are well aware of the significance of their advanced challenge and continue to conceive bold architectural design incorporating traditional materials while eschewing current architectural trends. 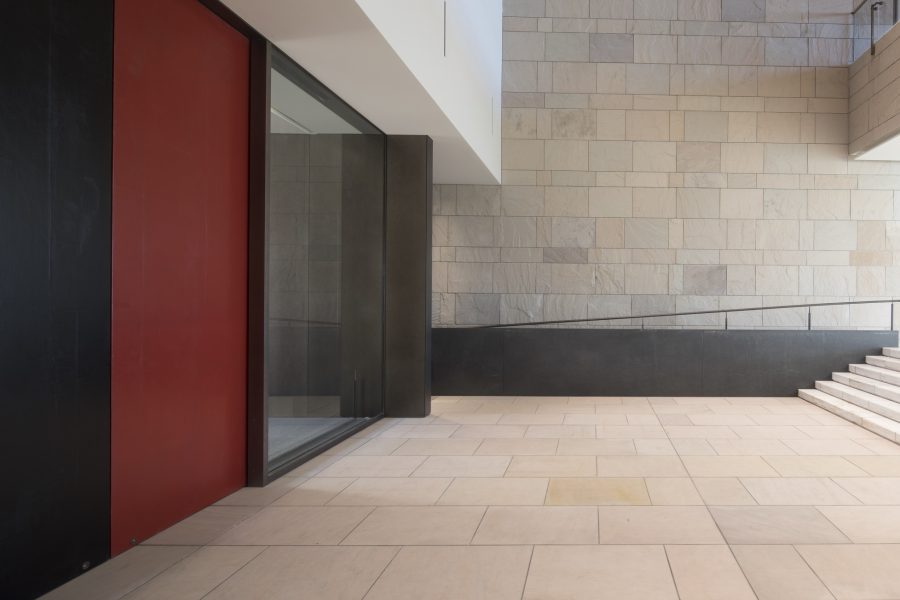 ARCHI-DEPOT Museum is the only exhibition facility in Japan that specializes in architectural models. There are two types of rooms, and the exhibitions are presented under the particular concept on a temporary basis. The exhibits include from study models through to finished pieces, and they are created by architects and architects’ studios all around the world which are active both in Japan and overseas. Also, ARCHI-DEPOT Museum has a warehouse adjacent to it to preserve architectural models, and the inside of warehouse is open only to visitors of the museum for a limited time. The visitors holding a flashlight in their hand can enjoy the dim storage space which is closed to the public.

ARCHI-DEPOT Museum is a new style of museum where you learn, enjoy, be thrilled,” and offers new experiences and encounters with architectural models.

For Inquiries about the exhibition and ARCHI-DEPOT MUSEUM

For Inquiries, Press Only