Le Corbusier is renowned as a master architect of modern times. As indicated in the “Five Points of Modern Architecture” that he advocated, architecture should be grounded in the image of a world developing according to rational ideas and technological innovation, and based on the belief that a single universal logic can find wide acceptance around the world.

It is less well known, however, that Le Corbusier paid meticulous attention to and showed deep interest in the context of planning based on the environment and landscape, as well as climate and culture. In his later works, including Ch andigarh in particular, interest in these aspects became a direct source of inspiration in his architecture and urban design, and contributed to the more complex development of his work as a whole.
This exhibition takes a close look at Le Corbusier’s works at Chandigarh as examples of his architectural achievements, and considers the relationship between his creations and elements unique to the region in the heterogeneous environment of India, far removed from Europe. In addition to valuable architectural material and models, original sketches and oil paintings by the architect himself, as well as lithographs and other art works, the exhibition introduces photographs and videos shot by photographer Takashi Homma in Chandigarh. This exhibition of diverse works allows visitors to sense Le Corbusier’s vision in terms of what he saw, heard, felt, thought, and attempted to express in the environment of Chandigarh. At the same time, it provides an opportunity to catch a glimpse of a spirit that endeavored to go beyond the norms of modern thinking and that lives on today in the works of Le Corbusier. 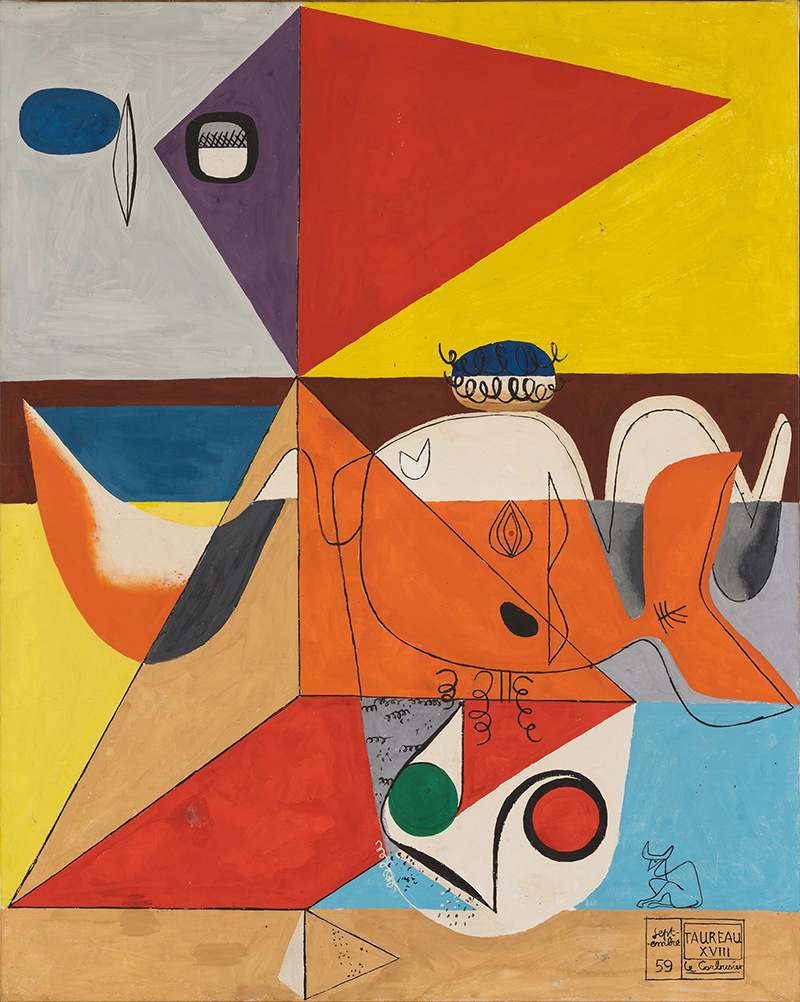 Display of models of three buildings in Ahmedabad (Mill Owner’s Association Building, Villa Sarabhai, Villa Shodhan)
Throughout India, the sight of various living things going about their lives without distinction and the rich environment that surrounded them made a powerful impression on Le Corbusier. This was to result in his formation of a worldview in which the activities of life become integrated and harmonized with nature, the land, the seasons, and the universe and, ultimately, led to the fruition of his own work with unique Indian characteristics. In addition to his achievements at Chandigarh, Le Corbusier completed four architectural projects in Ahmedabad, in the state of Gujarat. This exhibition presents models of three of his works in Ahmedabad as an introduction to understanding Chandigarh: The Mill Owner’s Association Building and the two residences of Villa Sarabhai and Villa Shodhan. In addition to examples of architectural responses to the Indian environment such as brise-soleil (sun shades) and fully revolving doors that can be seen in these models, visitors will be able to get a glimpse of Le Corbusier’s creations and a sense of the worldview he arrived at during his time in India.

Display of the oil painting Taureau XVIII and the Entre-deux collection of poetic drawings
Le Corbusier is also recognized as an artist who produced many paintings and other artistic works. His oil painting Taureau XVIII (1959) is one of the features of this exhibition, along with his Entre-deux lithographs (1964), a collection of poetic drawings. These works were produced in his later years and are a culmination of creative activities he engaged in as an exercise in conflicting concepts. Together with these works, the exhibition introduces Le Corbusier’s poetry and prose, which were newly translated for this exhibition (translation by Kanata Tanaka).

Photo and Video Works by Takashi Homma
The exhibition also features photo and video works from the “Chandigarh” series shot by photographer Takashi Homma during a visit to India. Some of the works in the collection are being exhibited for the first time. The works were compiled as a collection intended to evoke the breezes and smells that pervade Chandigarh and the sunlight that pours into its spaces. Homma attempts to capture in images the relationship between the architecture and the surrounding climate, something that Le Corbusier paid particular attention to. These visual works complement the reality of the city of Chandigarh that the models alone cannot convey.

1. Overview of the Chandigarh Project and chronology of Le Corbusier’s visits to India
In 1951, four years after India became independent, Le Corbusier visited India for the first time. He was 63 years old at
the time. He subsequently returned to India a total of 23 times over an approximately 13-year period. On all of the
drawings he created during his stays in India he affixed a different stamp representing each of his visits. This section of the exhibition presents an overview of the Chandigarh Project as well as a list of Le Corbusier’s stamps.

2. Source of models
For Le Corbusier, who left a rich legacy of paintings and other works of art, “bulls” were an important motif symbolizing strength and manliness. After learning that water buffalo were considered holy animals in India, which he visited many times, he became fond of illustrating bulls in sketches and paintings. From time to time, his motifs actually made their way into his architectural designs. For example, the shape of a bull’s horns found expression in the structure of the roof over the upper section of the portico of Palais de l’Assemblée, as well as the roof of the Assembly Hall. These roof structures also function as gigantic downspouts for rainwater. Another example is a sketch in the last leaf of the Entredeux lithographs, a collection of poetic drawings on display together with Le Corbusier’s oil painting Taureau XVIII, which can be understood to mean that the horns of the bull would metamorphosize into the Governor’s Palace.

3. Images of the conception
This section of the exhibition features sketches relating to the conception of the initial proposal for the Chandigarh Project. In letters dated February 26th to 28th, 1951, Le Corbusier wrote to his wife Yvonne to tell her about the completion of the Chandigarh Project. Sketches that he enclosed with his letters included not only images of the new capital with the Himalayas in the background and images of birds, cows and other animals, but also the image of a woman holding an infant. This image that hints at the birth of new life later reappeared on its own in a sketch in Album Nivola dated March 3rd. Sketches drawn in Album Punjab on March 1st show the initial ground plan for the capital as a whole. The design entitled “Terminaison de la création du plan de la capitale sur le rapport 7 à 7 ” dated the same day invokes the image of a form Le Corbusier commenced drawing in October 1950. It is an image depicting the union of a man and woman below an androgynous unicorn doing a handstand. This image was later associated with alchemy, and was added to the La licorne est descendue (published in 1955).

4. Axis
For Le Corbusier, an axis was not simply a geometric figure on a plan, but a spatial element supported by a line of sight that an upright person viewed horizontally. To illustrate this point, he often cited as an example the Acropolis of Athens, which he visited during his travels to the East in his formative years as an architect, pointing out the axis extending from Piraeus (the ocean) to the Pentelikon (mountain range) in relation to the far-off horizon (line of sight) on the Piraeus side which bisected this. Images of axes connecting to the surrounding landscape were also repeatedly used in the new capital plan in Chandigarh. A panoramic sketch of the Capitol through the Shivalik Hills with the Himalayas in the background brings this axis into view. A sketch Le Corbusier attached to a letter he sent to M.T. Harris illustrates in a straightforward manner the main axis that underpinned the overall plan of Chandigarh.

5. Overall effects of scale
Deciding on how to express the symbolic meaning of D’ensemble du Capitole was one of the issues Le Corbusier faced in Chandigarh. Therefore, while remaining aware of the large-scale axis (viewpoint) with the Himalayas in the northeast in the background beyond the Shivalik Hills, Le Corbusier arranged the main buildings of the Capitol Complex at intervals on a second axis bisecting the large axis at a right angle. In addition to creating a hill in between the two using excavated soil, Le Corbusier exercised his ingenuity in various ways such as introducing the effects of reflection through the arrangement of water vessels, and he structured the entire area to create a wide range of visual effects when looking across the site.
As a result, the entire building site became enlarged and the ease of physical communication inside was lost. However,
observing the site from Le Corbusier’s perspective, we can strongly sense his intent to fully exploit the location’s best and most unique attributes.

6. Adaptation to climate
Adaptation to climate was a particularly important theme in Le Corbusier’s challenging quest for appropriate architectural solutions in India. In addition to scorching heat waves of as much as 40 degrees, particularly in the period from March to May, India suffers from various harsh, dramatically changing weather conditions including high humidity from June to October and cold weather from November to February. With these conditions in mind, Le Corbusier intended to demonstrate the effectiveness of modern architecture. Thus, in addition to the problem of sunshine, which he had been wrestling with for some time prior to the project in India, addressing problems such as indoor ventilation, humidity control, and protection from the rain became important elements in his projects in India. The sketches on display in this exhibition present approaches to architecture that were researched specifically for adaptation to climate, and visitors will be able to see that Le Corbusier investigated residential plans from both the aspects of form and building materials to achieve comfortable indoor spaces in the climate of Chandigarh.

7. A city that lives on today, the hustle and bustle of people and nature, and the flow of time
In 2013, the photographer Takashi Homma visited India, where he shot the “Chandigarh” series. This collection of
photographic works is intended to evoke the breezes and smells that pervade Chandigarh and the powerful sunlight that pours into its spaces. In a sense, the city plan of Chandigarh as a whole comprises a singular structure where each building is enveloped by the city, the scale of which is subtly displayed in these works. Homma’s video brings into relief the daily life of the people and the flow of time, and conveys the energy of Chandigarh as a city that continues to thrive today. This series was produced as part of Homma’s “Cities and Buildings” within the context of a theme he has consistently pursued in recent years.